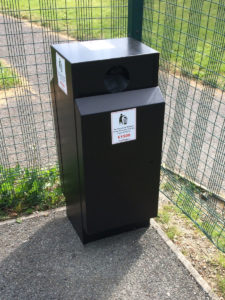 Early in January the bin inside the tennis courts disappeared.

The bin inside the tennis courts went missing recently. We contacted Fingal County Council who told us that they did not remove it and we presume that it has been stolen. We have asked FCC to replace the bin.

After a lot of asking, Fingal County Council finally installed a replacement bin inside the gate to the tennis courts. We appreciate the new bin though would have preferred that it hadn’t required weekly reminders over the last 5 months.